Award winners, future classics and some personal favourites are listed here in my top 10 new Australian books.  In alphabetical order:

I bought this recently, prompted by doing this blog post and realising I had no books by indigenous Australian authors.  This is a gap I need to redress, especially given one of the joys of reading is to gain a different perspective from my usual sheltered existence.  Tony Birch has won multiple awards and this short story collection has received rave reviews.  I shall report back once I’ve read it!

2. The Strays by Emily Bitto

Inspired by the Heide artists, this perfectly evokes the time and place of 1930s Melbourne and captures their bohemian lives.  Lily and Eva’s friendship feels like those of our teens, when a friend’s house was a wondrous playground, as they experience the thrills and risks of growing up.  The dark side (lack of parenting) is explored too.  Thoughtfully written with well-crafted characters, this won the 2015 Stella Prize for Australian women’s writing.

This is a bit of a cheat as it’s not released until October 2017, but I predict a 5-star read.  I loved The Narrow Road to the Deep North (2014 Man Booker prize winner), a thoughtful but unputdownable read with vivid prose and great humanity.  And his earlier novel Wanting, a story of Matthew Franklin (explorer and Tasmanian governor) and Charles Dickens, was a beautifully woven and original tale.

4. The Dry by Jane Harper

I really enjoyed this thriller. A smart protagonist and some realistic local characters, with a strong, well-paced story. Harper creates the atmosphere of a small Australian country town, both the sunburnt landscape and a community on edge. Some bleak aspects but it kept me guessing.

5. The Good People by Hannah Kent:

A widow in 1820s Ireland struggles with her deformed grandson. Doctors are beyond reach, the church no help so Nance offers to cure the boy with herbs & fairy rites.  As in Burial Rites, Kent brings to life women forgotten by history. The language is full of vigour & poetry, she evokes the way of life & land beautifully & the characters, with little to hold onto but their beliefs, feel real. Mary the maid has dignity & resilience, Nora is unflinching & Nance is firm in her wisdom but lives in poverty.  A little slow-paced for me, but thought-provoking and her prose is a treat.

6. An Isolated Incident by Emily Maguire

Shortlisted for this year’s Miles Franklin award. Another rural Australian thriller, this is distinctive for putting the women front & centre: Chris, whose sister was murdered, & journalist May.  Maguire sustains the constant feeling of threat that men potentially pose to women, and the ambiguities & blurred lines in relationships. She also reflects on the sadness of women having to be on their guard, sometimes putting up defences against men who are trying to love them. None of the characters are simply good or bad though, and this attention to nuance is one of the strengths of the book. Chris is a memorable character and this is a strong, honest book.

7. Music and Freedom by Zoe Morrison

A beautiful debut, intelligently written.  We follow Alice from her rural Australian youth to Oxford, then to old age.  Her bad marriage is hard to read but so sympathetically described and much is left unsaid.  Subtle and infused with music: Zoe Morrison is a pianist and her knowledge and love of music adds depth to the story.  Brava!

This is the latest by Kim Scott, twice a winner of the Miles Franklin award, and looks wonderful (the cover, for a start!).  The first page is strong and, like Common People, his voice has the ring of truth and authenticity.

9. The Boy Behind the Curtain by Tim Winton

Another 5 star prediction from one of my favourite authors and four-time Miles Franklin award winner.  I loved Cloudstreet, an epic family saga and modern Australian classic, and the distilled perfection of Breath.  Winton is a masterful writer and I highly recommend all of his books.

10. The Natural Way of Things by Charlotte Wood

I will admit that this has been sitting in my shelf for two years now because I’m too scared to read it.  Winner of the Stella Prize and Prime Minister’s Literary Awards 2016, it has been highly recommended as an important, thought-provoking read, and is described as ‘feminist horror’ story of women who are drugged and imprisoned in a broken-down property in the middle of nowhere. I promise to brave it and report back soon!

And that’s a list of ten, hopefully diverse, Australian books that we should all be reading this year.  Who are your favourite Australian authors?

I’m doing Book Riot’s Read Harder Challenge 2017 for the first time this year, with some of the (always-inspiring) London Book Clubbers.

We have 24 tasks to complete, so it equates to two per month (although one book can cover  more than one task).  Like DiverseAThon, it’s great way to expand my reading.  Fantasy and comics will be new to me, and Roxanne Gay has set a task to read a book published by a micropress, which will be fun to seek out.

Here is my progress so far…

Read a debut novel:  several of my 2017 reads have been debuts: Shelter, The Trouble with Goats and Sheep, The Nix and The Dry by Jane Harper

I really enjoyed The Dry, a thriller set in rural Australia.  A smart protagonist and some realistic local characters, with a strong, well-paced story.  Harper does a wonderful job of creating the atmosphere of a small country town, both the landscape and a community on edge.  Recommended.

Read a book by an immigrant or with a central immigration narrative: both The Good Immigrant and Behold the Dreamers by Imbolo Mbue qualify – I reviewed The Good Immigrant (excellent selection of essays) in an earlier DiversAThon post.

Behold the Dreamers is a warm, engaging story about Cameroon immigrants to New York.  The characters are sympathetic and Mbue does not shy away from the difficulties they face, the stress of job insecurity and the strain this puts on a marriage.  For me, it lacked dramatic tension, as we know what happened to Lehman Brothers, and it was a little too earnest, but I liked having Jende and Neni’s perspectives.  Thought-provoking and good, honest writing.

Read a book published between 1900 and 1950: Fantastic Night by Stefan Zweig.

A wonderful collection of Stefan Zweig’s stories.  His writing is elegant, philosophical and humane.  Zweig was extremely erudite but wore his knowledge lightly.  He conjures up beautiful turn-of-the-century European settings and a time when people travelled, for leisure and then necessity.  The bittersweetness of past loves, the fears of war and a reverence for forgotten greats (a bibliophile, an actor) drive these tales, told with warmth and style.

Read a YA or middle-grade novel by an author who identifies as LGBTQ+.  I have to thank Jamie Klingler of the London Book Club for this one: the audiobook of Aristotle and Dante Discover the Secrets of the Universe, read by Lin Manual Miranda.

An excellent book – poignant, true and funny. I laughed, I cried and absolutely loved Miranda as a narrator.  A winner!

Read an LGBTQ+ romance novel: Nightwood by Djuna Barnes.  I’ve had this on my TBR for years, ever since I read about Djuna Barnes in a biography of Peggy Guggenheim, so in between the 1,000+ pages of Infinite Jest I thought I’d do this as a ‘quick’ read and tick it off my list.  Wrong!  Only 208 pages but oh so dense!  My review below…

Sublime but elusive, the story of the doomed love between two women, told in vivid prose.  Paris is seedy, the characters flawed and Gothic.  Barnes’ writing gleams: her poetic wordplay and wit reminded me of Shakespeare; the confessional tone pre-dates Camus’ The Fall, and the Woolf comparisons are apt too.  Strong, dense, it refuses to be matter-of-fact, but feels searingly honest.

Read a book where all point of view characters are people of colour.  I have something quite different for this one.  Our Adelaide Book Club is going to Hong Kong in June, so in preparation this month we have read Crazy Rich Asians (about to be made into a movie). 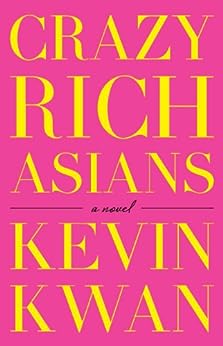 This has been called Dynasty on steroids and the next 50 Shades of Grey.  If you’re a fan, you’ll love it.  Some of the praise is overblown (it’s no Pride and Prejudice or Evelyn Waugh), but Kwan meticulously describes the lives of the super-rich in Asia, and the materialism and prejudices of those places, with accuracy and humour.  One-dimensional characters, every luxury brand name-checked.  A bit superficial for me, but very good for what it is.

And here is my Read Harder TBR stack!  I’ll leave you to guess what tasks these relate to.  Next, I’ll be immersing myself in Japanese books for our trip to Tokyo in April. Yay!  Sayonara for now…