The Baileys Women’s Prize for Fiction will be announced on 7 June.  Here is my quick and incomplete guide to the shortlist.

The shortlisted books are:

The Power by Naomi Alderman

Do Not Say We Have Nothing by Madeleine Thien

Stay With Me by Ayobami Adebayo

The Dark Circle by Linda Grant

The Sport of Kings by C. E. Morgan

I’ve read four of the list (pictured below – missing my copy of Do Not Say We Have Nothing, back in London but probably my favourite of the list).

I am intrigued by First Love and have heard mixed reports of The Sport of Kings.  My thoughts on the four I’ve read … :

Women have the power to electrocute you with their hands.  This gives them swagger and confidence; men are afraid to walk the streets at night.  Gender wars and global upheaval ensue, reverse-echoing current geopolitics (men must stay at home, genital mutilation, etc).  Alderman seems to say: women would behave in the same way as men, given the chance.  Muscular, engaging writing and interesting characters.  The story is science fiction (which I don’t tend to enjoy because of the extra leaps of faith it requires) and works at a macro level, so I wasn’t ‘in’ its world.  But a very strong book.  I would not be surprised if it won.

Yejide and Akin are married in 1980s Nigeria and trying to have a baby.  Traumatic events occur, without being sensationalised.  This is a gentle book, despite the emotional punch.  The writing does not draw attention to itself but presents the characters with sensitivity and compassion.  It took me a while to get into and I did not love it overall – I couldn’t get traction or immerse myself in the story – but I admired its originality and sense of place.  A quietly strong book.

Beautiful writing, sympathetic characters sent to a sanatorium with tuberculosis, and an interesting moment in history – 1949-51 – I wanted to love this more than I did.

Well-crafted, I liked brash Lenny and Miriam in London, but the parts with bored, ill sanatorium patients dragged and I never got attached to the characters (although Persky the American was fun).  The story felt contrived at times, pressing on the reader the symptoms of TB and historical treatment of the disease.

But – beautiful craftsmanship, each sentence honed and polished, thoughtfully written, intelligent and (I’m assuming) historically accurate.  There is much wisdom here, but it’s put as the characters thinking, which was sometimes a stretch.  For example, Hannah the German (“Germany had an innate dislike of chaos and untidiness”) reflects that “in the spirit of the British there was, she felt, a kind of human glitch, the system could handle a sense of humour …”

The patients analyse Metamorphisis and its parallels to their situation and the Jews (waking up one day and being in a body that is treated as though one might as well be an insect).  This was interesting but I found it a little clunky.

The sanatorium part ends and soon after that I thought the story came to a natural end, without a neat resolution but the tension in the story (who survives) is answered.  But then there is a long tail as the story goes on for 40-odd pages, following the surviving characters into old age, which I didn’t need.  Perhaps it’s ‘completing the circle’ or to satisfy the readers’ curiosity, but I thought it weakened the novel.

I so wanted to like it more!  I plan to read more of Linda Grant as she’s hugely talented and maybe with a story that’s more about the characters and less about an ‘issue’ I’ll have more luck.

Do Not Say We Have Nothing 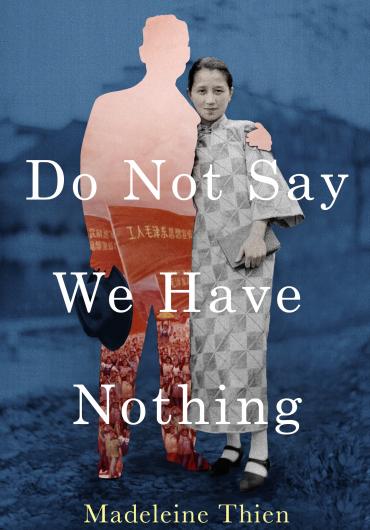 A devastating story, beautifully told.  It may inspire you to listen to Bach, Shostakovich or Prokofiev anew and deepen your compassion for all the people of China who lived through the Cultural Revolution, and their children.  It’s long and intricate – I needed a cast of characters at times – but it weaves together whole lives with care and delicacy and the characters feel real.  Accomplished, this feels like the novel Madeleine Thien was born to write.  Highly recommended, with a tissue caveat.

This is my pick for the prize!  Who do you think will win?